His right hand self-concously hidden because it ends in a round jumble of undeveloped fingers, the young graduate student Ben Quick was driven to see the surplus C-123Ks at Davis-Monthan Air Force Base back in 2008. A trip into the past which dictated his own future. You see, Ben's dad gifted him a "minor glitch" in Ben's DNA, a leftover of Pop's service in Vietnam during the War. Ben was visiting Davis-Monthan to learn more about that gift, and the airplanes which delivered it, the UC-123K "Provider", now surplus and in storage at Davis-Monthan. 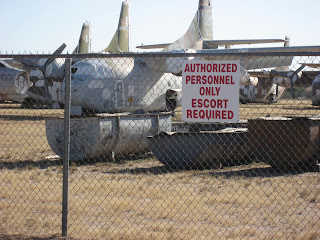 Ben's driver at Davis-Monthan was the head of public relations at the base, and together they drove to the perimeter fence...and could go no further. "Authorized Personnel Only" was the sign, and hazmat suits with respirators and cautious decontamination was its meaning...

"They're fenced off. You can't get to 'em. Nobody goes in there."


That's dioxin, folks. The poison on the aircraft which was even more intense back in '72-'82 when members of the 731st Tactical Airlift Squadron and the 74th Aeromedical Evacuation Squadron flew the plane. The dioxin had deteriorated greatly in the desert heat and in the 30 years since its last use in Vietnam, but it remained deadly enough to take serious precautions. These precautions were not taken while we flew the airplane we were assigned. And like good aviators, we flew as much as possible to become as proficient as possible, meaning we became as contaminated as possible.


I re-read Ben's article this morning when I woke up in discomfort. I have a handful of illnesses, most of them Agent Orange-presumptive. It is presumptive of me to state that Agent Orange caused my problems, but I do believe so. I especially believe because Ben's article reminds me that official history of Operation Ranch Hand details the fact that in 1954  DOD was notified by Monsanto that Agent Orange was contaminated by a toxic substance...dioxin. The official history offers the fact that scientists from Harvard and CalTech, and other universities, approached DOD repeatedly (and publicly), and convinced the military to end Operation Ranch Hand and the use of Agent Orange...AO tests showed it so toxic, that one drop in four million gallons of water (4 parts per trillion) induced cancer in rats. Finally, we're told that the mixture used in the War was more toxic than that due to a more economical manufacturing process and mixing procedures...it was as high a concentration as 140 parts per million.


We're not on this blog to debate Agent Orange in Vietnam. Not part of our brief. But we are here to state that our duty to America placed us aboard the C-123K/UC-123K at a time that the Air Force knew contamination remained. You see, the very engineering and testing procedures to develop the UC-123K spray apparatus included reports that the airplane remained contaminated after spraying. So contaminated that brooms and water hoses wouldn't remove the remnants. Even scraping down to the metal wouldn't remove the toxins, as the poison had penetrated the metal.


Thus, there were official records to suggest the aircraft were known to have remained contaminated after Vietnam because the testing done before Vietnam said so. More of concern to us is that when the Air Force became re-aware of this in 1994, AFMC general officers and JAG attorneys focused their concerns on the resale of the airplanes, on the political implications of having sold contaminated aircraft to foreign governments, and on the political implications of having sold toxic airplanes to Disney! That the public would find disturbing...poisons and Disney.


I haven't met any conspiracy nuts in the Air Force and few outside it. It is hard to believe there is or was any conspiracy to expose us to toxins in our flying duties...I don't believe that is the case. What is crystal clear, however, is that from 1994 on, none of the memos, reports, tests, findings, inspections, publicity...nothing was able to bring forth a concern about us aircrews! As aircrews the very first of our concerns is the safety of the people we are flying. We'd do anything to protect their safety...that's why we wear wings. Why did these officers (LtGen Farrell, Col Ursula Moul, Col John Abbott, LtCol Wade Weisman, Mr Ralph Schoneman, BGen Tom Hanes, Col Joseph Corcoran, BGen Olan Waldrop and others), in the performance of their duties, officers who should have known of our concerns, fail to concern themselves with our safety?


Ben's article appeared in Orion Magazine in 2008 and his talent is obvious. It is also obvious that he has learned to touch-type with five fingers on one hand and a stump on the other, thanks to his father's intense exposure to Agent Orange. The father's back looked like raw hamburger and was diagnosed as chloracne...intense exposure to herbicides, and dad didn't heal until about seven years after his return from Vietnam. So Ben's initial birthday gift from his dad was a set of twisted DNA, not quite like it should have been without Agent Orange.


I guess my question is why did a public affairs officer at Davis-Monthan AFB and her graduate student guest know the aircraft were contaminated...why did apparently everybody responsible for them in AFMC and the Air Force Medical Service know, but nobody got around to telling us aircrews. Everybody knew but us. Everybody was taking precautions...but us!

note: Ben visited Davis-Monthan before the remaining C-123K/UC-123K aircraft were decontaminated by destruction, melted into scrap metal ingots.
at 03:39

Got something to share? Nothing commercial or off-topic, please.

We're aircrew, medevac, maintenance and aerial port veterans. Duty placed us aboard the C-123K after Vietnam, from 1972-1982. VA now honors our claims for Agent Orange exposure. God Bless America and those who defend the nation.